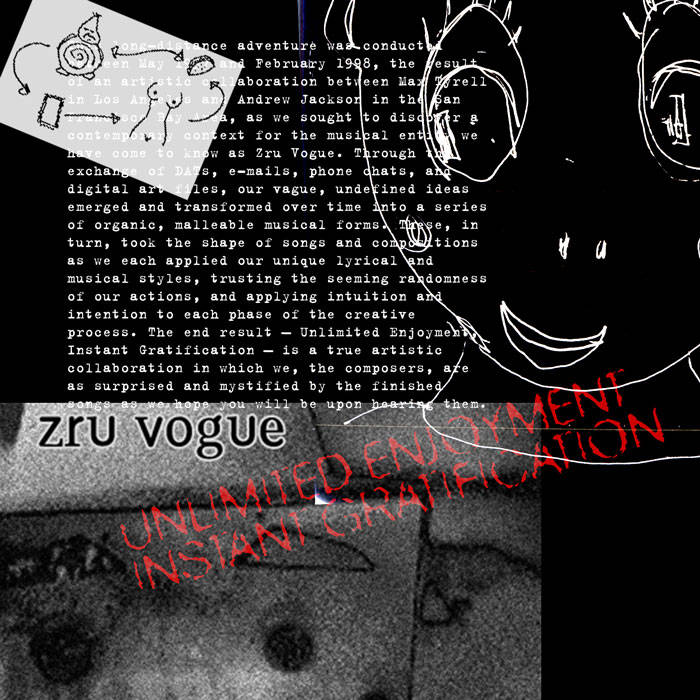 And on the seventh day the Zru did mail and on the ninth or tenth day
the Zru was received. The Zru then spread its word upon the winds to
lands near and far.
The people were amazed and held the Zru up to the sun and did thus
worship it. Only the select understood the true word of Zru. Small
gatherings of the faithful assembled to hear the prophets speak this
word. The Zru was faithfully misinterpreted over and over again
changing in its meaning each time the word was retold until no
resemblance to anything the divine hands of the Zru gods had fashioned remained. The Zru no longer held any
meaning as had been intended from the beginning. For many years the
Zru did wander the desert in search of the promised ridiculousness.
Leading a thirsty band of exiles from the land of Everyday, the Zru
was somehow lead to the mountain. Leaving the hoard in mystery the Zru
climbed this mountain alone. The Zru was gone for many days and in
it's absence the hoard grew restless and soon settled down in front of
the many word processors they had found in the desert and began to
type spreadsheets, invoices and a multitude of mundane business items.
Unaware of the treachery spreading like fire in the desert below, the
Zru came upon the sacred frozen dinner. And it was good. As the Zru
descended the mountain it became apparent that the many followers had
become numb within the ecstasy of excessive normality. Waving the
empty dinner tin tray, the Zru spoke as if from the air. "Ye who would
succumb to the average pleasures of death take heed; The sacred dinner
is upon that mountain; it is there for all who embrace it; go now unto
the mountain and worship". In a cloud of dust the followers ran,
sandals flapping, toward the top of the mountain. In a golden and
supreme silence the Zru slowly turned away from the mountain and began
walking back across the desert from whence they had first come,
leaving in search of a fine glazed ham and a cup of very strong black coffee.